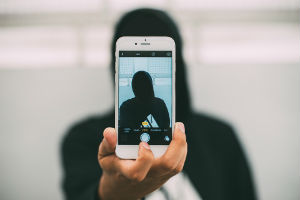 Posts from the challenge feature men and women taking selfies in state, federal, and county employee uniforms. The captions typically depict or suggesting subversive, acts or behaviors or statements, using the hashtag #feelingcute.

The posts are seemingly meant to be satirical in nature. They are raising eyebrows because of the nature of the sensitive nature of the work done by some of the postures, such as correctional officers.

The caption “feeling cute, might just gas some inmates today, IDK,” accompanied a selfie of a woman wearing what appears to be a Texas Department of corrections uniform.

A prison spokesman stated to the Houston Chronicle that a handful of correctional officers employed by the Texas Department of Criminal Justice are under investigation as a result of alleged inappropriate social media posts.

The challenge ruffled feathers in Ohio, where a water employee allegedly joked about shutting off customers utilities.

Columbus Water Works responded publicly saying it was having discussions with its employees about proper use of social media in regards to the workplace.

Pictures from the challenge are still being posted to a Facebook page titled Correctional Officer Life, although TDCJ is investigating some of its employee. Though the posts now have a less inflammatory tone.