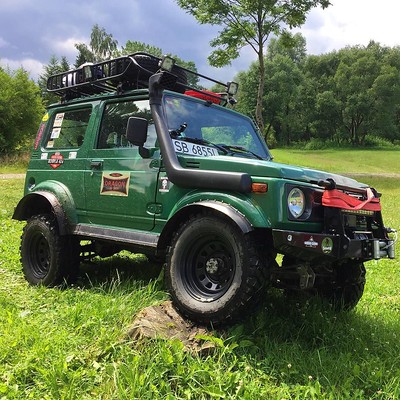 The Suzuki Samurai was a tiny terror in the ’90s. It stopped Jeep in its tracks and went on to beat out other rock-climbing monsters.

The ’90s were a weird time for the automotive industry. With the unveiling of the SUV, came a new frontier for those who had the urge to travel. The Samurai wasn’t the largest and most “nature crushing” as the rest, but, man, could it climb.

Imagine having a tiny vehicle with 4×4 capabilities that could out-do a Jeep in a hill-climb. That’s what the Samurai offered. This tiny titan could do everything you wanted (except sleep inside). It could compete with the off-roading capabilities better than most SUV’s at the time. It had the same gas mileage as a 2020 Honda Civic and had a pretty decent reliability factor. Not as much as Toyota or Honda, but their output was decent.

6,888 meters high. That was the previous record held by the Jeep Wrangler division. They set the record in the ’90s and held onto it for a long time…until Suzuki showed up. Due to the lightweight of the vehicle, it had much less to lug up a mountain. Also, the Japanese market for vehicles allowed for easy performance tweaking of the Samurai. Jeep, who had previously held the record for highest altitude was dethroned by a tiny Japanese company…and a tiny Japanese car. To this day it still holds the record and things haven’t changed for Jeep to shift gears.

So, when you have a short wheelbase like the Samurai or even a Jeep Wrangler, this typically means that its easier to roll. So when Consumer Reports came out and said that the Samurai had a pretty high tip rating, the popularity of the car sharply decreased. Sales for the Samurai went down by 70% the following year, which forced Suzuki to take it off the American market. For the sake of the auto manufacturer, literally everywhere else in the world loved the car and sales continued for the Samurai well into the early 2000s.

It beat awesome records, had a great three-year selling point in the US market, and stood as a herald for what a tiny car could do. All of these factors made this guy a consumer car that everyone wanted. Unfortunately, one bad review cost the Samurai the American market, but it didn’t slow anything down in other foreign markets.

The first time I had ever seen one of these was back in 2008. I was working part-time at a movie theater. A co-worker of mine actually had one of these still and loved it. After looking at it for a couple of days, my other co-workers decided to play a prank and move the car. Instead of finding her keys, the five of us simply all took a spot on the outside of the car, lifted it up and moved it into the back parking lot. We could only imagine what onlookers though when they saw five people walking with a car around a building but I’m sure it was entertaining.

Do you have a Suzuki Samurai or another hard-to-find vehicle that you need transporting? Well, here at Austin Car Transport we have every shipping service available. From door-to-door to expedited car shipping, we’ll make sure that your auto is handled with the utmost care.

Honda Accord 2023 Steadies Your Worries with a Reliable Powertrain