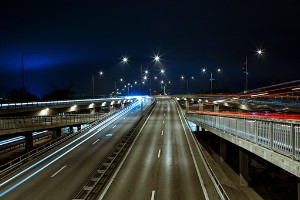 AUSTIN, TX – Local Austin Police reopened the primary lanes of northbound Interstate 35 in the area located south of Rundberg Lane in the aftermath of a three-car crash. Highway traffic had been shut down for a period of hours overnight, and the accident resulted in three women being transported to the hospital.

Police say three automobiles collided while going north at around 1:30 a.m. In fact, all three cars were completely destroyed in the accident. Two of the three cars were SUVs and suffered significant damage to both sides of their shell. The third automobile was a hatchback that was beyond repair with a completely crushed front end.

Traffic on that section of the highway was detoured to the I-35 frontage lanes. By 5:50 a.m., the highway and all its lanes were available to morning rush hour traffic.

As Corporal Jonathan Bynum offered the media an update, there was an additional car that spun out of control near the crash site and just behind the officer. Fortunately, it did not make contact with anyone or anything.

Bynum said, “Be aware, slow down and move over to the right.”

“We do have a move over law and when emergency lights are on move over or slow down 20 miles per hour, lower than the speed limit,” he said.

Bynum went on to reiterate how dangerous working on the highway.